Lines in the Sand by Lyn Gala 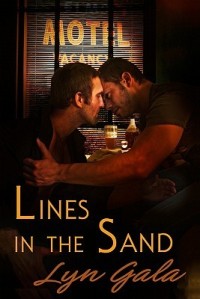 Three years ago, Carl Ragar turned on the mob. His conscience couldn’t handle the murder of an innocent bystander, and he had to turn his back on his mentor, Petroc “Pete” Barbu, a man he’d admired and lusted after. Pete made no apologies for his job as an enforcer, but he’d never planned to get himself or Carl involved in the murder of a reporter. When Carl turned state’s evidence, Pete couldn’t even pretend to be surprised.
Now Pete’s still on the run, and Carl is unceremoniously dumped out of witness protection. Two men tangled in their own pasts, they will have to face the shifting moral lines in the sand that drove them to make disastrous choices. Once Pete and Carl were partners who trusted each other with their lives-now they’re struggling to save their souls.

When  I found this book….

When I read the Serbian MAFIA, Serbian references in the first 2 %

Seriously growing up I always has aspirations of being a Mafia man’s mistress… such is life that didn’t happen for me… because I grew up with a bunch of punks that took being anything “gang” related to the extreme. Ever been with a Serb? We are intense bunch without adding guns and being gay into the mix.

This book was a good easy breezy read for me as it was intense. The line in the sand on morals. Right and wrong.

I could feel Carl’s anxiety off the pages. It made me wanna bite all my nails down to the quick.

He was intense, he was a hit man, an enforcer… he was infatuated for years with Carl. Thoughts of Carl came in 3’s… (such a Serbian/Orthodox thing) Everything happens in 3’s. For Carl and Pete~3 year divides.

3.5 I liked this book stars