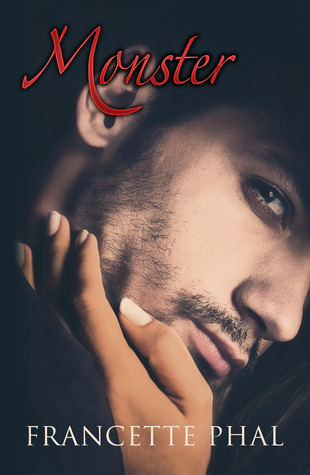 Monster by Francette Phal
Accidental Gold digger.Circumstance forced Eden Mercer to sell herself to Dominic Armstrong for half a million dollars and in return she is to play the dutiful wife in public and submit to him completely behind closed doors.
The Tyrant.Dominic is Ruthless, manipulative and sadistic but Eden is determined not to break under his cruelty. But how does one persevere when in the clutches of a Monster?

A wonderfully woven tale of misunderstandings, passion and forgiveness.
Written in multiple POV, this story is not unique, the premise is not different but the author made sure to deliver a book that is unique and different with a plot that was well-developed; She had the ability to capture my attention with a stellar writing style, smooth flowing prose and characters I was able to connect with, I was hooked from the first page.

Dominic is a man with many issues brought on by a horrific childhood, Eden is a woman in debt. The moment Dominic sees Eden,  he is consumed by his desire to have her, all he could think of is owning her. Eden’s dire financial situation leads her to accept Dominic’s offer of marriage, thus setting up the events that make up this compelling novel; She naively thinks that with this union, she will find stability, a safety net and hopefully happiness. Boy is she wrong because all Dominic sees in her is a gold digging opportunist and he treats her as such for 4 miserable years.

Eden finally has enough and decides to flee, we see Dominic doing and using every means in his possession in order to find her. Their reunion is a wake up call for him, he starts to reassess his former beliefs where Eden is concerned, he begins to SEE her and in doing so, he sees the horrific mistakes he committed in their marriage.

I went in expecting to hate Dominic, but couldn’t. He was as the title suggests behaving like a monster but was he really one?  Dominic was  a mystery that I wanted to see unraveled.

She didn’t understand how someone could be such an open enigma. But that was exactly how Eden saw him. She’d formed an opinion of him long ago based on her experiences and she’d been content to believe in that opinion as true, until now. It was the mystery of him that piqued her unfailing curiosity and try as she might, she could not abandon the idea that there was much more to him than what he chose to display to her and the rest of the world.

I loved seeing Dominic do everything in his power to get Eden to forgive him and to be redeemed, I loved him full-stop.

Eden is a great heroine, she is a strong one. Enjoyed being in her head, felt her pain, pitied her indecision and admired her love for Dominic yet at the same time protecting herself and what’s really important. One person I took a strong dislike to was Jenna, Eden’s so-called best friend.

All I can add is that I will definitely reread Monster in the future. This is my first book by Francette Phal but certainly won’t be my last, in fact having read a sneak peek into her next novel, I’m already looking forward to it and to Carver.

Filed under A Must Read, Francette Phal, Standalone

Tagged as A Must Read, ALPHA HERO, EMOTIONAL.