The Sordid Promise by Courtney Lane 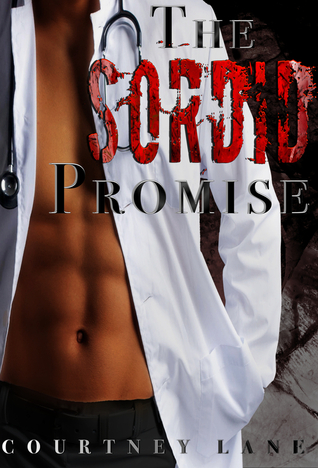 ***Please read the Preface (revised on 4/15/14 for clarity) before purchasing.

When physical pain allows you to escape your reality; what do you do when the pain is no longer strong enough to quiet the emotional ache?

Diouana “Nikki” returned to her hometown six months ago to tend to her sick mother. She thought she’d left her “baggage” behind her on the opposite coast, only to find that it never left her side. As her self-destructive thoughts begin to consume her, her mother — realizing Nikki’s torment — pushes Nikki to complete her last wishes.

Eric Brenton, Nikki’s new neighbor, lives in a dark, chaotic world that is easily hidden behind his model good looks and cocky demeanor. Unapologetic about his dirtier intentions, he sets his sights on Nikki with an offer to help her. But his help comes with very unorthodox conditions and a huge price.

And Eric…comes with an extensive black box warning label.

An unstable heroine, a controlling hero, supporting characters with hardly any redeeming qualities, add many unexpected twists and turns and you get ‘The sordid Promise’

The Sordid Promise=== an engaging, addictive and dark novel that I couldn’t put down.

This book is one giant head trip- It’s not a book that is intended to make you believe in the power of love, love which can conquer all and bring on the redemption of flawed characters, however it is one of the most thought-provoking books I have read.

Eric is one hero who doesn’t make excuses for his actions, he was a mystery to me throughout the novel; I thought I started to know the real Eric,  I thought I could piece the puzzle that is Eric, but then the author kept throwing in one twist after the other and I was left floundering and guessing till the end.

Nikki’s feelings of despair, loss and desperation were so palpable, there were moments where I was screaming at her not to give up.

Eric and Nikki are one couple that should not work yet I wanted to work so  badly; Two imperfect people who are perfect for each other.

The supporting characters were just as messed up as our protagonists Estelle, Tamala and Angie were some of the most annoying, conniving characters I’ve encountered, I just didn’t care for their fate and their presence one bit.

Do not read this if you’re after a light romance and a quick me up- however if you are looking for a book that will make you think and even ponder your morality, then this book is for you.

6 responses to “The Sordid Promise by Courtney Lane”