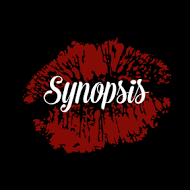 Ever since her mob king boyfriend, Cameron Hillard, abandoned her for her own good, Emmy has been attempting to move on with her charmed college student life as if nothing happened.

Worse yet, she is now keeping a dangerous secret.

After just a short time with Emily, Cameron has lost control over his world.

As he miserably attempts to return to what is left of his life and unravel the mess he has made of the underworld, Emily’s hate turns to desperation. She needs to kill the kingpins responsible for Cameron’s death before they come looking for her.

As Cameron secretly observes Emily, he has no idea of the danger he has placed her in—or that it may already be too late for him to save her.

Scare Crow is a tale of revenge, terror, and love as Emmy and Cameron embark on separate journeys to face enemies, correct past mistakes, and…………..

find their way to their destinies. 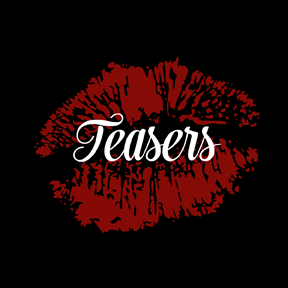 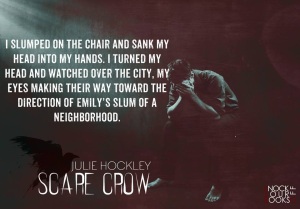 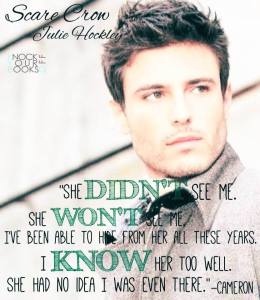 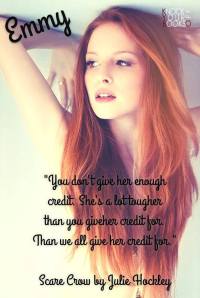 So if you know me, you know that I love Cameron. At one point, on GR, my name was Mrs. Cameron Hillard. But, alas,
people kept calling me Hillard so I had to change it LOL.
Scare Crow~ 2 years, 1 month, some odd days, hours, minutes, seconds. Jubilation and apprehension. Because lets face it, I feel as if I’ve waited so so so damn long to have Cameron back into my hands, my arms, my bed… the waiting, the wanting, the longing… was BRUTAL. And I suffered along with thousands of other fans. In silence. We got a name of the book. Scare Crow. And OHMG I swooned and celebrated. WE GOT A BOOK NAME. And then I bared again in the silence. Waiting, wanting, longing. Then every once in a while we would get Ms Hockley’s updates and I would get wound up in a tailspin of emotions. Waiting, wanting, longing.

And then alas, the cover reveal. The synopsis. THE DATE. And as a blogger an ARC.

OHHMG. I have Cameron in my HANDS. HOLY SHIT. Breathe Mare Breathe. Where’s the paper bag????? OMG I can’t breathe….  I stared. Stared at the Kindle APP. Stared at the cover. I was scared. Because I’ve waited so long I didn’t even want to BELIEVE that he was really here. My gangster. My long awaited “white knight”. My #1 fictional love. The one I could never forget. 500+ odd books later… I’ll never forget his name, his story. NEVER. He is ingrained into the very essence of my being. Few authors can make a character so freaking BAD and LOVEABLE all at the same time.

There’s this thing about gangsters, the mob, anything “sully” that I absolutely love. Especially if you are the “boss”.  Your cunning, and ruthless, and bloody. BUT. When you love, you love HARD. Harder then  most because you know in a blink of an eye, all of that, can be taken away. It makes your black & white world have colour. And love will cloud your judgement. Case in point= Scare Crow

Julie Hockley can write. Write so good that you absorb the pages and the next time you blink you’re done the book. This is a testament to those who love what they do.

There is only hardcore here. No whiney heroines. Dealing with your punches with backbone.

Emmy is and will always be 1 kickass heroine. And she had a lot of punches that she needed to roll with, on her own, in this book.

My in love moments of Scare Crow:

With that said. I had a hard time with this book. Not because it was written poorly, not because of any 1 event. But a whole bunch of things. That thing about expectations. You know that saying? Yah, I should have heeded this.

I for one, know for a fact, that I did indeed daydream about how Scare Crow would be written. And it didn’t fit my day dream and that’s my problem, not anyone else’s. Because again I’m not the author. I’m just a rabid fan who slept, breathed and waited.

And while the writing is superb, the events in Scare Crow didn’t sit well with me.

I wanted more Emmy/Cameron time. There meeting again… what was that??? It just happened. And I get it. The events that lead up to it. The almost dying. The child birth. This took precedence. But still the little communication we were privy to was just NOT ENOUGH.

Griff???? I need Griff to find his real love. Emmy was not that. They, to me, were more like brother and sister and the possible love connection. No. Just no. I got icked out. Griff as a person, bless his heart, I love him. But his jealousy and antics caused me to get severely annoyed.

The lady mob bitch. I hate her so much I even forget her name. Cause she is irrelevant and was made relevant in Scare Crow.

Carly and Spider- This relationship has disaster written all over it. It seems Carly will never get over her true love Bill. Spider needs to venture out and find someone, who loves him solely.

So much time lost. And so many gaping holes. Holes that can fit quite a number of moles on top of each other.

I am left with more questions than answers. And then….. lil whispers and words written all over facebook and goodreads. THERE IS GOING TO BE A BOOK 3!!!!!!!!!! OMG.

And then I sat back and analyzed. SOOOOOO DING DING DING. This is BOOK 2. So all of my above emotions were because I thought this was the end of the road. AND ITS NOT. So all those holes I feel within myself will get filled. Its gonna be a wait… I know this like I know the back of my hand.

I know I will be going through all those same emotions again.

A former germaphobe and clean-freak turned mother of two, Julie collects enough tears and snot in a month to recreate Slimer Monster from Ghostbusters. Other than playing devoted wife and mama, Julie is the funniest person in the room (according to the 3 year-old and 2 year-old in said room) and can build the most awesome Lego rocket ship you’ve ever set your eyes on (according to her). Oh, and she has a full time career and has also written a bestselling novel. Superhero, or just downright insane?