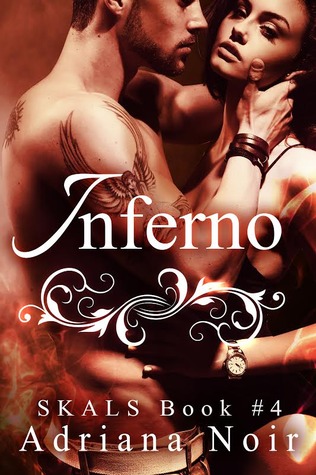 The lines are drawn. After stumbling across news of Project Blue and all it entails, Sebastian is left reeling. He realizes the world as he knows it and the lives of everyone he loves now hangs in a delicate balance. Bit by bit, new pieces come into play and it seems following Marx’s orders are the only way to survive the potential aftermath—but at what cost? If the ruthless commander succeeds, SKALS will become an all-consuming regime that brings the world to its knees. If he rebels, Marx will kill him and go after everyone he loves, including Taylor and their unborn child. But the burden of guilt rests heavy. The brief glimpses of life and love he’s experienced have opened the jaded agent’s eyes and he can’t help but wonder, with SKALS at the helm, what kind of existence would anyone lead?

No matter which path Sebastian chooses, he stands to lose everything he’s ever loved. Taylor is in more danger than ever, and with other government agencies closing in, he quickly discovers there is nowhere to run—nowhere to turn.

Resolve will crumble. Alliances will shift, and SKALS will be torn apart from the inside out. Their life is in violent upheaval, but there is no looking back. No second chances. In order to save himself and the woman he loves, Sebastian might have to take a final stance against Marx and the brutal organization he leads, but taking the man down won’t be easy.

As the drums of war beat louder, only time will tell who, and what, will remain standing in the end.

“Welcome to SKALS, cupcake. I suggest you strap yourself in. You’ve just entered the ninth circle of hell.” ~ Agent Josh Reevers – Edge of Obsession<div>

Nance while waiting for ‘Amazon Jail’ to release Sebby

Nance~~~ Well this is because Inferno has been one of my  most awaited books, I became obsessed with Sebby from the beginning of the series- there has not a week that went by where we didn’t have a discussion about him.

Silvana~~~ I love Adriana’s style of writing, it’s like she has written SKALS with every book preference of mine in mind. I have to mention that I thought inferno was HOT (no pun intended). I fell in love with Sebastian from the first book, I remember finishing it and thinking this is one of my favorite male heroes to date.

He is Sebby when he is all good and and hot and heated…. and Sebastian when he is deadly, intense, rigid, controlling and unpredictable…. or in other words, scary! There is nothing soft when it comes to Sebastian! 😉 We love him just the way he is. He was built that way and we wouldn’t want to change a thing.

When Sebby goes all weepy and trembling, when all that desperation sets in,  wanted to shake him a few times and scream “Sebby, snap out of it, we need you”. Having said that, Sebby is and will remain a great hero, broken, twisted, loyal, loving and protective. The goodness that he kept hidden from the world is finally revealed.

Now to talk about Inferno

With this final installment, one of the most gripping series comes to an end. What a bittersweet feeling this is, what a great journey!
Inferno had it all, nail-biting suspense, angst, romance and passion delivered through impeccable writing.

Sebby in this is in knowledge of Marx’s project blue plans for SKALS, unfortunately he doesn’t know what to do, he feels that there is much more at stake if he makes the wrong move. He feels caged, his emotions in this book are so palpable, we are made to share his pain, fears and regret.

Taylor‘s character has come a long way, she is completely devoted and loyal to Sebby. Taylor is a lot stronger in this book, there’s plenty of fight in her. There are moments where she had her doubts and moments of fear, but she is more resilient and is Sebby’s rock.

Sebby and Taylor were just dynamite together, their relationship and trust in each other have grown so much since the first book.

He didn’t have the words to convey his feelings. He never would where this woman was concerned. She was the heaven to his hell, the only thing capable of piercing the darkness where he dwelled.

“Just like that, her heart sank. She tried not to let her reluctance show. Dinner parties had never been kind to them”

This book is intense; there is always that never-ending threat in the air!!! It’s violent, edgy, angsty, shocking and yet romantic, hot and passionate! And how about that surprising twist at the end? Certainly did not expect that, the ending was EXPLOSIVE-  Our heart was in our throats and it left us with an emotional high.

The supporting characters were written so well, you can’t help falling in love with them or just wanting to throttle them…

We most specially love to hate one of the most deprived villains , Marx!!!

Josh is a clown for a lot of the book, he became a source of annoyance, where in earlier books he was one of the most enjoyable characters.

This book was totally worth the wait, would have loved a more detailed epilogue but all in all perfect. What a beautiful ride this has been.

Again to reiterate that This series is A MUST READ, it is dark yes but a most captivating story, it engages the heart along with the mind.   A big thank you to Ms. Noir  for keeping us on our toes, for never knowing where the story was heading- for the unpredictable Sebby that we shall miss.

Silvana~~~ We had so much fun reading this book as we always do together, it’s funny how our thoughts mirrored each other. Thank you Nance for being a great reading partner and for the rants ❤

Nancy~~~ I am grateful for Sil for BR this with me!!!! Thank you for wickedly telling me to go ahead and panic and eat more chocolate while I kept waiting for my Amazon to release Sebby… then thank you for giving me a heads up when the book became live finally cause then I committed the Sebby crime of forgetting! The horror!  And, thank you for all our rantings! Loved it! 😉

OTHER BOOKS IN THE SERIES

ENTER OUR GIVEAWAY TO CELEBRATE THE RELEASE OF BOOK 4

2 responses to “Inferno (SKALS #4) by Adriana Noir And Giveaway”