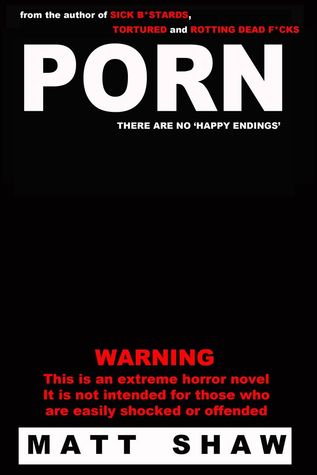 WARNING: THIS IS AN EXTREME HORROR NOVEL. There is gore. There is bad language. There are scenes of a sexual nature.

I will not try and talk about the plot in this review because I can’t without giving anything away- if you could call the following ramblings a review.

I went into this book with certain expectations, well it was recommended by Jahy (prepared myself for a crazy ride), this book totally surpassed my expectations and I think it mocked me at one time for daring to predict what will happen next!

So what do you call an author that navigates you through a journey, albeit a crazy, twisted and messed up one, then totally takes an unexpected detour that leaves you stunned! Well besides a great writer…

There was a twist towards the end which I totally hated, left me totally angry and wanting a rewrite…

However the ending of the book totally made up for it, this book will definitely stay with me for a while.

MATT SHAW was born, quite by accident (his mother tripped, he shot out) September 30th 1980 in Winchester hospital where he was immediately placed on the baby ward and EBay. Some twelve years later (wandering the corridors of the hospital and playing with road kill when he was on day release), the listing closed and he remained unsold, he was booted out of the hospital to start his life as a writer and hobbit – beginning with writing screenplays and short stories for his own amusement before finally getting published when he was twenty-seven years and forty-five seconds old.

Once Published weekly in a lad’s magazine with his photography work, Matt Shaw is also a published author and cartoonist. Has to be said, can be a bit of a flirt and definitely, without a shadow of a doubt, somewhat of a klutz.

Favourite books
“Roald Dahl’s Collection of Short Stories”
Tim Burton’s Melancholy Death of Oyster Boy
Anything, really, written by himself. Because he is that good