Destined for an Early Grave (Night Huntress #4) by Jeaniene Frost 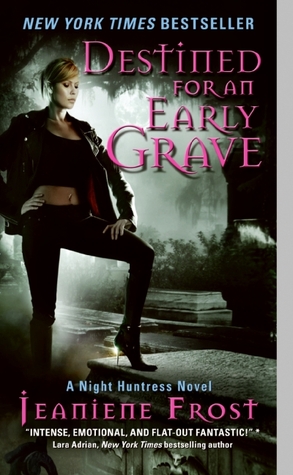 DESTINED FOR AN EARLY GRAVE(Night Huntress #4)
by Jeaniene Frost
Since half-vampire Cat Crawfield and her undead lover Bones met six years ago, they’ve fought against the rogue undead, battled a vengeful Master vampire, and pledged their devotion with a blood bond. Now it’s time for a VACATION

. But their hopes for a perfect Paris holiday are dashed when Cat awakes one night in terror. She’s having visions of a vampire named Gregor who’s more powerful than Bones and has ties to her past that even Cat herself didn’t know about.Gregor believes Cat is his and he won’t stop until he has her. As the battle begins between the vamp who haunts her nightmares and the one who holds her heart, only Cat can break Gregor’s hold over her. She’ll need all the power she can summon in order to bring down the baddest bloodsucker she’s ever faced . . . even if getting that power will result in an early grave

The action, suspense, drama, humor, romance and a little bit of angst, all worked together to make this my favorite book in the series so far, it had it all.  Bones and Cat are easily becoming one of my favorite book couples, can’t get enough.

BONES = yummy, he gets better and better with each book, loyal, loving and a protective partner. He maybe patient but he’s no pushover,  so I was not surprised at him exploding and finally saying enough is enough when Cat does something impulsive and acts without thinking, AGAIN. What follows are moments of uncertainty regarding his actions, hoping there is a good explanation and I may have hated him for a bit, however that didn’t last long. By the end, I fell in love with Bones’ character again. He is what a true alpha hero should be, without being an overbearing asshole and over the top.

I spent most of the Night Huntress Series between loving Cat and wanting to smack her, the woman is stubborn; However I did feel sorry for her in this installment, though she is a big catalyst for the drama that occurs between her and Bones, but she does redeem herself in a big way. It’s good to see her character growth and the way she matures with every book.

When I started this series, I never thought I would actually care for Cat’s mum and her safety, let alone like her; little did I know that she becomes one of the favorites. She still tends to drive poor Cat crazy most of the time.

“She was my mother. I couldn’t threaten to slap, stab, beat or even name call her. I tried to think of something to scare her into never mentioning the predicament with the Dreamsnatcher again. I’ll become a swinger,” I said. her eyes bugged. Uptight rearing made her uncomfortable with alternate lifestyles. “That’s right. threesomes, foursomes, and more. bones knows about a thousand chicks who’d love to hop into bed with us. It’ll be kinky, we’ll get out freak on.-”

I really enjoyed how Destined For an Early Grave was both character and plot-driven, full of action, characters that just are endearing and witty dialogue.  Not a boring moment. The more books I read of this series, the more addicted I become.

Jeaniene Frost is the New York Times, USA Today, and international bestselling author of the Night Huntress series, the Night Prince series and the Broken Destiny series. To date, foreign rights for her novels have sold to twenty different countries. Jeaniene lives in North Carolina with her husband Matthew, who long ago accepted that she rarely cooks and always sleeps in on the weekends. Aside from writing, Jeaniene enjoys reading, poetry, watching movies with her husband, exploring old cemeteries, spelunking and traveling – by car. Airplanes, children, and cook books frighten her.

Filed under A Must Read, Jeaniene Frost, Paranormal