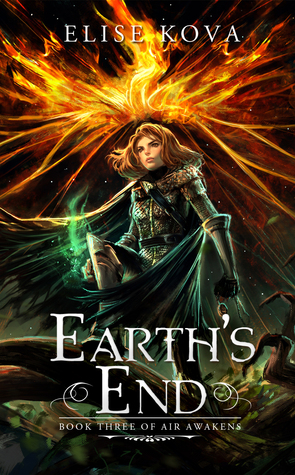 A woman awoken in air, a soldier forged by fire, a weapon risen from blood.

Vhalla Yarl has made it to the warfront in the North. Forged by blood and fire, she has steeled her heart for the final battle of the Solaris Empire’s conquest. The choices before Vhalla are no longer servitude or freedom, they are servitude or death. The stakes have never been higher as the Emperor maintains his iron grip on her fate, holding everything Vhalla still has left to lose in the balance.

To know more about the author, click here : Elise Kova

What an amazing series and writer. May is such a long wait for the next book but it’s so worth it!

I was searching for a book that has librarian and magic in it, what inspired me to do that is a long story, anyway, that search lead me to this series, thank God! It is so so good! Here we have an apprentice librarian, Vhalla Yarl, who is sweet, innocent and smart, turned into a sorcerer and not just any sorcerer, but a powerful one, a windbreaker. Then there’s the prince, Aldrin, the crown prince, a fire lord, whom Vhalla accidentally bonded and later fell in love with. Both have to fight to keep each other and fight for the war they are facing. And so much more!

I love how Vhalla’s character grew, and though she is stronger and has grown into this powerful person, yet her vulnerability remains.

There is so much to say about all the  characters and the storyline, I’ll some it up to just breathtakingly, heartrendingly good. I could not get enough on the awesome action scenes, it’s like I’m there and I want to edge them on, like “go go go, fight, run!” Lol. And the romance, it’s heartbreaking, there is so much angst, specially in this third part of the series. It makes me want to scream “Enough!” specially for Vhal.

Aldrik and Vhal,  together, with such intense feelings and their combined power, it was so beautiful to read I could cry. 🙂

I’ll just stop my review here and just leave a sample of one of my favourite action scenes :

“Wind Demon,” the man growled, his sword at her chin. The other Northerner was behind her. He allowed Vhalla to sit, which was his first mistake. He spat a few words at her in a language she didn’t understand, and Vhalla took the opportunity to twist her wrist and magically jerk the sword from his hand. Vhalla turned her head and watched it impale the eye of the Northerner behind her.
A boot met her temple and Vhalla rolled, overcompensating for the man’s second sword plunging into the ground next to her. Vhalla grasped the weapon from the fallen Northerner’s face, then stood on shaky legs. The man took a careful step in a wide arc, and the forest seemed to hold its breath as she stared him down.
The tension quivered, then broke.
Vhalla lunged, letting the man disarm her. He grinned wildly in false triumph and Vhalla’s palm clamped over his mouth. His face exploded with Vhalla’s cry of anguish as she forced every last ounce of power she had in her down his throat and outward. Covered in blood, shaking, Vhalla turned her eyes skyward.
“Run!” she screamed. “Run or suffer the fate of your friends.” The last warrior hovered in the trees above her. Vhalla didn’t know if they understood her words, but she knew what they had seen.
“Run fast, for you will need to outrun the wind!”

And one of my favourite romantic liners: ( a scene where Aldrik presented Vhal with a gift, a pocket watch as a symbol of a promise)

“You wished for time,” Aldrik explained. “I heard each utterance when you beseeched time to stop, for mornings not to come. I want you to know I shared your every sentiment. I wanted to give you the promise of my minutes, my hours, my days.” His long fingers curled around hers, around the watch. “My future is yours, Vhalla Yarl.”

I am officially a huge fan of Ms. Elise Kova, what a treasure to find! One the best fantasy-magic-romance series that I’ve read this year.